by admin
in Crypto Mining

Crypto Cloaks has just released the 3D printable STL files for their custom Bitmain AntMiner S9 modification from a noisy ASIC miner to a silent space heater that mines Bitcoin while keeping you warm during the cold winter days. They have already made available their DIY guide to help you build your own AntMiner S9 space heater even without the need of a custom case, but with the case that you can print yourself if you have access to a 3D printer – things not only work well, but also look well with your new space heater. The PDF includes their pretty detailed experience and tests during the creation process making it easier for anyone with a helpful walkthrough of the data collected and what you need and how to make your noisy S9 ASIC miner into a silent space heater that still manages to pay for the part of the electricity it uses thanks to the mined BTC. 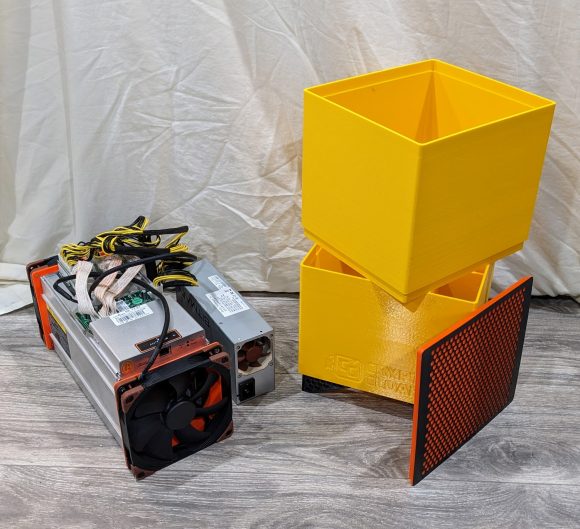 Even if you do not own or have easy access to a 3D printer (like a friend that can print it for you) you can still order the case to be 3D printed and have an old Bitmain AntMiner S9 ASIC miner turned into a silent space heater mining BTC for less than $400 USD including buying a used S9 if you don’t have one lying around unused already. If you do have an S9 and a 3D printer that you can use to 3D print all the required parts, then the cost is significantly reduced, so you will need to buy just the extra fans and Ethernet to WiFi adapter. So, why not get to doing yourself a space heater that mines Bitcoin now instead of buying a pre-built one such as Heatbit that will cost you more than twice what you would normally spend if you buy everything and built it yourself.

And something from us to think about, you can swap the AntMiner S9 with an AntMiner L3 Scrypt ASIC and similarly have it optimized for silent operation, it will be easier since it can consume less power for optimal power efficiency with a custom firmware installed on it or you can up the heating power and get extra performance. The thing is that thanks to merged mining LTC and DOGE the L3+ ASIC miner might be able to pay for more of the electricity it uses compared to what an S9 could at the moment. Scrypt ASIC miners haven’t outperformed the L3+ and what it can do with custom firmware unlike SHA256 ASIC miners that have been faster in development and the S9, although from the same period is not as profitable nowadays. So, you might want to experiment with an AntMiner L3+ instead of an AntMiner S9 as a base ASIC miner for your new space heater, especially if you have one lying around and unused already…

Investors Predict 12% Decline For BTC In Next Two Weeks

Uniswap Was Saved From Vulnerability By This Security Firm

CleanSpark Mines Record 697 Bitcoin In January, A 50% Increase Since December

MicroStrategy says no plans to stop trading BTC as paper loss hits $1.3B

No Result
View All Result